Beautiful things really do come in small packages, as Team Talmadge proves with the addition of an elegant guest bathroom that comes in under 40 square feet!

A family of five sharing a sprawling Depot Hill home with a single bathroom – it worked out just fine for this couple. But once their three children were grown and had moved on to homes of their own, it was time to turn an empty bedroom into a guest bedroom and bath. Talmadge Construction turned out to be the perfect remodeling team for them. “It was really genius how they took our idea and ran with it,” the homeowner says. “All we wanted was another bathroom, and what we got was spectacular.”

Creative Use of Limited Space 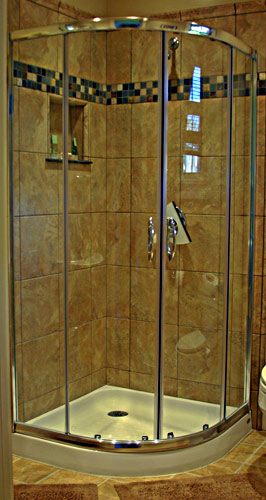 The Talmadge team creatively carved a full guest bath from one corner of a large bedroom, formerly occupied by one of their daughters. They began by relocating the bedroom door and closet to maximize the available space. The sink and shower were cleverly tucked into adjacent corners, a trick creating the illusion of space, and an under-sink towel bar and basket for toiletries work together to keep the walls uncluttered.

The focal point of the bath, however, is how the stunning shower enclosure erases the edges of the traditional corner shower. Its unique, convex glass enclosure features curved, double doors that ensure adequate entry, yet remain compact when open. Custom tile work in earthy, terracotta tones guarantees that it’s a one-of-a-kind creation.

Final Details
In addition to the bathroom remodel, the couple also wanted a major visual pick-me-up. “This bedroom and the hallway were lined with tongue-and-groove walls and ceiling. It was really dark, and riddled with termites,” he explains. Brand-new walls, freshly painted soft yellow, sport family photos, and the new baseboards are fashioned from wide planks of wood to match the rest of the house.

The bedroom’s original oversized (leaky!) casement windows were replaced with somewhat shorter windows that better suited the room’s proportions. (These new double-paned windows also help with the home’s energy efficiency). Guests have plenty of privacy now that the windows are dressed with new two-way blinds; opening from either the top or the bottom, they also let in plenty of light.

Reliable and Professional
They were impressed with the reliability and professionalism of all the Talmadge team members. “They were in at 8 and out by 4,” he recalls, “and they were really good at respecting the neighbors. They cleaned up every day and took debris away at least once a week.” Even after losing a week after running into some tricky structural issues that needed approval,” he points out, “they still kept to the schedule and finished when they planned to.”

The couple’s long-time friends make frequent use of the guest room now during long golfing or hiking weekends. “We’re really pleased with the entire thing,” he reflects. “They used a tight space and created a really unique room. And personally, I really like the way they brightened up everything – it doesn’t look like a dungeon anymore.”