Blog Image
You are here: Home / Our Work / Whole House Remodels / Building a Relationship Along With a Home 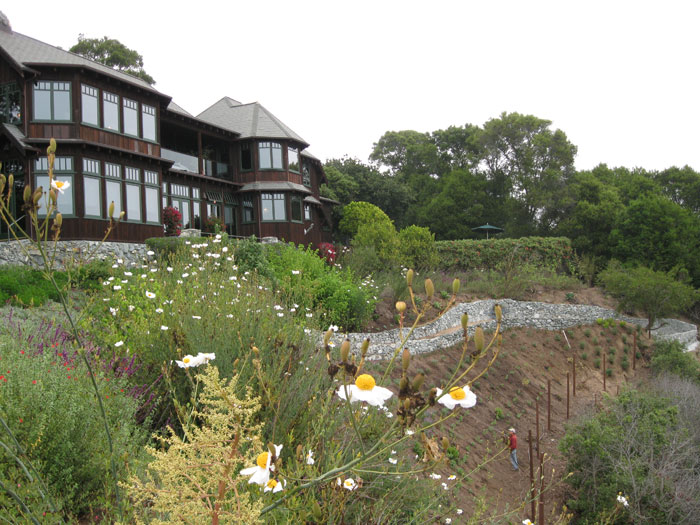 Who do you call when winter rains seep through your double-paned windows? A second-story deck floods your kitchen below? When little mountain critters sneak their way into your pool shed, gnawing through the wires and shorting out the equipment? Talmadge Construction, of course!

Who do you call next? That was this homeowner’s problem for the first seven years she owned her 25-year old home. Perched atop a ridge in the Santa Cruz Mountains, the stunning property sports a 180-degree view of the coastline. A bank of windows across the entire south face of the house lets in all the changing light from the sea and surrounding hills. She retired from her high-visibility Silicon Valley job to live a life of outdoors, watching bobcats and deer; staying on the lookout for elusive mountain lions in her drive. Over the years, she’s developed a trusted relationship with her landscaper, investing time and effort planning paths and plantings and spaces to sit and reflect and enjoy her surroundings. She addressed home maintenance issues as they arose, but never found the relationship with a contractor she enjoyed with her landscaper. “I put off addressing issues, because how would I know if the work was done right?” Her windows leaked each winter (she used to keep a pile of beach towels under each window to soak up the water) and after consultations with numerous experts, replaced the roofs with synthetic slate. Fireproof and beautiful, perfect material for earthquake country – but it didn’t stop the leaks, and fresh rainwater still stained on her ceiling beams. What to do next? She wondered for another winter.

One rainy night, thought, this homeowner found she needed immediate help when an upstairs deck flooded into her kitchen. Water recovery specialists were out within an hour, averting a disaster, but who could to discover the cause of the flooding and fix the problem? “When things happen to your house, you don’t know who to go to for help. I thought, you don’t call a big company like Talmadge for a leak in the roof. But I loved that ad they ran, the one with the dog that says, ‘We Do Small Jobs, Too!’” When she learned that Talmadge was also highly recommended by her trusted landscaper, Dan Johnson, she phoned them. It was, as they say, a match made in heaven. “I didn’t even call anyone else!” she recalls.

The deck problem was simple to diagnose and fix. Inaccessible gutters under the decking had become clogged with debris over the years. Talmadge cleaned them and created access to prevent future flooding. “I liked their approach to the work on my deck, so we began discussing other problems I had around the house.”

Next on the list: the pool shed. It had also received a synthetic slate roof, but the wooden structure had significant rot. Animals constantly made their way in, nesting, gnawing through the wires, and causing problems with the equipment. “Talmadge kept the structure and the new roof but rebuilt all the walls and plugged all the gaps so it’s animal-proof now.” At this point, she was thoroughly impressed with the quality of work as well as the work ethic of the Talmadge Team. “I liked so much the way they handled themselves,” she explains. “And I felt comfortable with them in my home.”

The homeowner and Team Talmadge moved on to Phase Three, addressing those leaking windows. The diagnosis: each strip of wood holding the glass to the window frame had rotted. The water not only got into her home, it collected between her double windowpanes. “It turned into a huge job because there are 256 windows on the south faces of the home!” They replaced the strips of wood, (“they called them ‘stickies,’” she recalls), replaced the glass in all the windows, and installed fresh window film, finishing up by restaining and repainting the house. “It was just a huge job. They were here for four months, with scaffolding on the outside of the house. But they were gentlemen, always showing up on time, and I saw how much they love the homes they work on. I learned a lot from watching them.” She especially appreciated the fact that Talmadge was able to bring in every specialist, from the painters to the window film contractor. “We went over all the details of the contract and then I could relax, let them be in charge, and not wonder who I would have to call for the next step.”

“It’s been one full winter now since the repairs, and so far, so good. And I’m absolutely thrilled with Talmadge. I always knew what to expect, their pricing was fair, and there were never any surprises. Every single person who came to work was friendly and competent. If they say something, they fixed it. I just can’t recommend them highly enough – no matter what the size of the job.”