Blog Image
You are here: Home / Our Work / Kitchen Remodels / No Kitchen? No Problem for Talmadge Construction 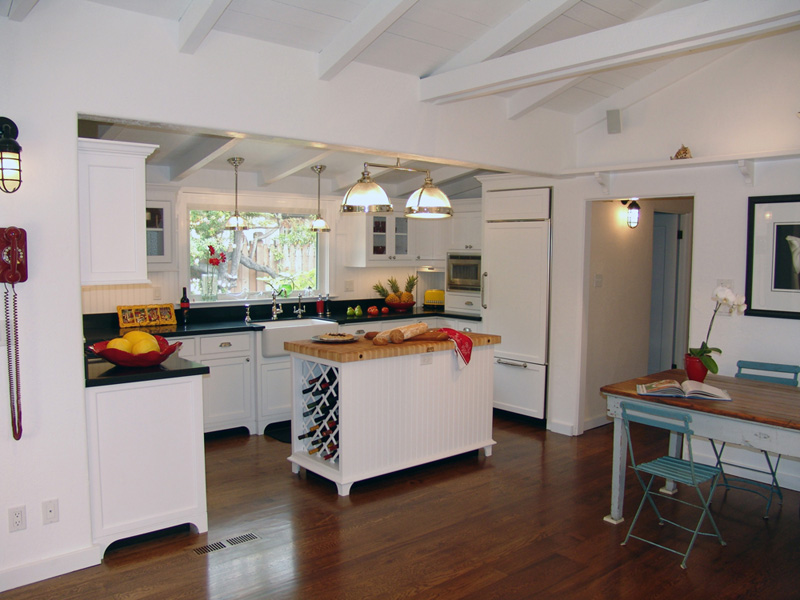 How do you design and build a modern kitchen that blends seamlessly with a converted 1920’s casita-turned-bungalow? Talmadge Construction faced a unique challenge:

White stucco cottage, red tile roof, mature landscaping, quiet, residential neighborhood and a bluff overlooking the sea – this couple were delighted to find all the charm Rio Del Mar has to offer in this compact, two-bedroom, one-bath bungalow soon after they began their hunt for a second home. They wanted to be near the beach, where they could get away from the daily hustle and bustle of the city, maybe catch a few waves on a Saturday afternoon, then kick back and fix a gourmet dinner that night. “It would have been too small to live in full-time,” they explain, “but as a weekend home, it’s cozy and perfect for us.”

The structure has an interesting history, one that led to a unique kitchen design challenge. Built in the late 1920’s, it was an original casita for the old Rio Del Mar Country Club Inn. Guests staying in this bungalow took their meals at the main lodge, so it did not have a kitchen. Then sometime after the Depression, when it was sold as a private residence, the covered “sleeping porch” along the side of the house was turned into a tiny cooking area. “There were three doors leading into it – from the driveway, the entryway, and from the house, where you had to step down into it. “It’s the ultimate in afterthoughts!” she laughs. “We loved the house, but my husband loves to cook, and he made me promise that if we bought the house we would start immediately on remodeling the kitchen.”

Design unveiled
The problem they faced was not to remodel the kitchen as much as it was to design and build a kitchen to integrate into the style of the house. So Talmadge Construction’s design-build model perfectly suited their needs.

“We worked collaboratively on the design,” she said. She wanted to maintain the look and feel of the original casita. He wanted high-quality kitchen appliances. They both wanted to open up the kitchen, creating a shared living-dining-kitchen area. “And I wanted the kitchen to be a pleasure to look at from the living space,” she stated. So the Talmadge Construction team came up with footed cabinets designed to look like circa-1940 furniture, with crown molding over the cabinets and a bead board backsplash. The dishwasher and refrigerator hide beneath matching cabinetry. A stainless steel Wolf range sports whimsical red handles. “Daniele [Grenier, the architect] was very hands on! She spent a lot of time researching online, and she even met us herself up in Redwood City to choose the granite for the countertop.”

Structural challenges conquered
To create the large common room, a load-bearing wall had to be removed. “Taking out that exterior wall was the biggest structural problem,” she remembers. “They had to be able to support the weight of the roof with those heavy tiles.” Once that was accomplished, they discovered that the exposed beams on the raked ceiling of the living area did not line up with the beams in the kitchen! “I think that’s one of the things Jeff is most proud of, figuring out how to move those beams over.”

Amazing Attention to Detail
And it wasn’t just in the ceiling; the homeowners are impressed with the overall Talmadge Construction eye for detail. “The craftsmanship is so high, and the attention to detail huge.” he states. Some of the impressive details of their new kitchen include:

Just in Time
The entire design-build project, from the first meeting between Talmadge Construction and the Schuman-Leals took six months. The design process began in January and ended in March, construction began immediately, and the entire project was wrapped up on July 4. “They finished on time, to the day,” he remarked. “Everything was seamless from start to end; it was meticulously managed. This group is your dream contractor.”

Forward to a recent Saturday at the beach house. Their toddler runs around in stocking feet on the white oak hardwood floors while Brett chops fresh melon from the farmer’s market on the butcher block topped island. Freshly brewing coffee gurgles from the machine camouflaged in a corner. Looking around at the gleaming black granite countertops and fresh white cabinetry, it’s hard to believe this room was never a part of the house. No kitchen? No problem for Talmadge Construction. 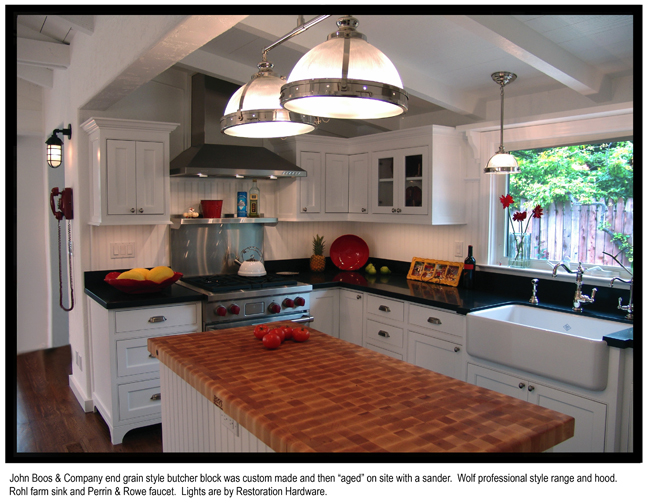 Send Us Your Resume